I just wrote a post about how to teach por and para, which is a classic old-school Spanish teachers’ conundrum.  And then in the staff room I heard two of my French-teaching colleagues talk about “Dr and Mrs Vandertramp” verbs.

French is like German: you have to use either avoir/haben or être/sein plus the main part of the meaning verb when you want to say like I went or she bought.  I think one is called the fast farticiple and the other is called, what is going on or the meaning verb.

I taught French like 18 years ago and kids always got these mixed up.  So like the genius I thought I was I did some research and learned about Dr and Mrs Vandertramp, a mnemonic for remembering which verbs use être and which use avoir to make the past tense. I taught that to the kids (along with the house diagram below). 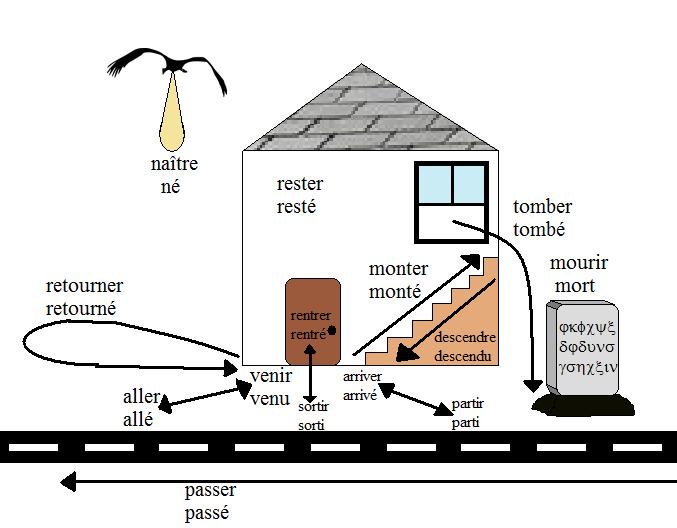 Th kids memorised it , and they did well on their verb quiz (my cunning motivational tool to get them to study), and when they actually had to write a paragraph or whatever on their test, they all totally blew it.  J’ai alle.  Je suis achtee, etc.

Mais non! I thought, tabernac, what did I fail to do? Years later I would realise, thanks to Mr Blaine Ray and Dr Stephen Krashen and finally professor Bill VanPatten, that we learn grammar from language, not language from grammar, as Lomb Kato said.  Or, as VanPatten puts it, “things like person-number endings on verbs must be learnt from the input like anything else; they can’t be taught and practiced in order to build a mental representation of them.”

So, if rule-teaching doesn’t work, an grammar drills etc don’t work, and if even fun mnemonics and pictures don’t work, how DO we get kids to acquire the “rule” for avoir and être use in the past?

(While we’re at it, we might as well solve another classic French (and Spanish, and German) teachers’ problem at the same time:  how to we teach the difference between the imperfecto/imparfait  and the passé-composé/pretérito?)

First, we start using these–yes, in the past tense– from Day 1 of French 1.  Yes, our total beginners can handle more than one verb tense at a time.  If kids hear this a lot, and understand it, they will eventually pick it up. You can start asking/creating a story on Day 1 of French 1 with the following sentences:

Yes, you have three verb tenses here.  Kids can understand.  In your next story, you use an avoir verb, like elle a cherché right along side your être verb. And you keep doing this–using language naturally, albeit with carefully limited vocabulary– from levels one to infinity.

If you are a French teacher who has been saddled your whole career with a textbook, and you are wondering what?!? teach three verb tenses from Day 1?!? Impossible!, trust me.  Our brains pick up all grammar at once, so to speak.  And if even I, a terrible C.I. teacher at best, can do it, anybody can do it.

Second, we do not ask kids to memorise mnemonics or rules.  This is because even if they do something as pointless and boring as memorisng Dr And Mrs Vandertramp, this grammatical knowledge is useless in real-time writing and speaking.  It takes too long to remember and apply the rules consciously.  And, as Bill VanPatten reminds us, conscious knowledge cannot become implicit competence.

Third, when we translate, we translate meaning and not grammatical geekery.  So in French, we translate il est allé  as “he went,” and we do not add “and this is the direct vocative object transitive verb tense bla bla.” For il a besoin de…, we do not say “French requires the use of a bla bla bla…”  We just say “it means he needs” and if little Johnny ever gets curious, we can say, “well it more specifically means he has need of“.

Fourth, we don’t worry about it.  When Maninder goes to Paris and asks est-ce que le train a sortí instead of est-ce que le train est sortí, the Frenchman with whom he is talking will understand him perfectly and say pas encore.  The Frenchman will think, allors c’est un americain but whatever. meaning has been communicated.  We have waaay bigger fish to fry in our French classes than obsessions about verbs.

Anyway.  The bigger point?  “Un-Englishy” grammar should be used from Day 1, comprehensibly, naturally and frequently.  If the kids hear and read it enough, they will pick it up.